A bruise to the brain (hematoma) is the result of blood leaking out of a ruptured artery, vein or capillary following head trauma. The initial traumatic rupture is considered a primary brain injury. The process thereafter of an expanding pool of clotting blood from the injured site, and the damage it causes, is considered a secondary injury. 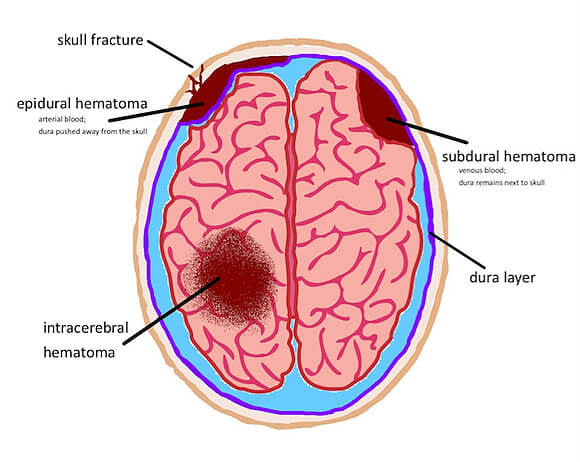 Hematomas are identified and defined by their location in the brain relative to the meninges, the tough outer covering of the brain comprised of three distinct layers: the dura, arachnoid and pia mater. Right below the pia mater is the brain. Epidural, subdural and subarachnoid hematomas occur between the brain and the skull. 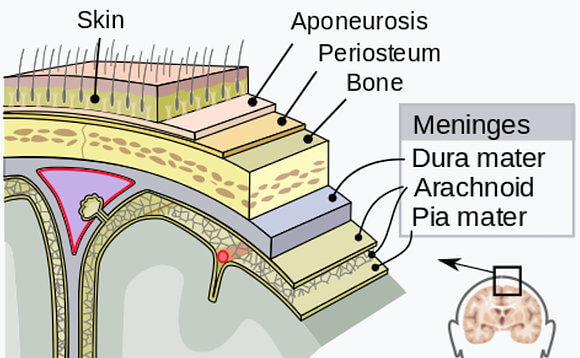 Intracerebral hematomas occur within the brain. Symptoms can present differently depending on the location of the bleed, though some symptom characteristics are universal. Hematomas are diagnosed almost exclusively through CT scan. Once identified, the hematoma can then be closely observed to determine if it’s static or increasing in size and thereby posing an increasing risk of further brain damage. Depending on its size and location, observation may be all that’s warranted.

Many hematomas dissipate on their own without surgical intervention through the use of drugs to lower blood pressure, diuretics to get rid of excess salt and water and medication to counteract a blood thinner. These decrease the risk of further bleeding. This monitoring should only take place in an intensive care unit.

Epidural hematomas occur rapidly because they usually come from arteries which are under higher pressure than veins. They reach peak size in 6 to 8 hours post injury. The majority of these bleeds originate from meningeal arteries in the temporal region of the brain. Patients with an epidural hematoma usually suffer a loss or altered state of consciousness, then a period of being awake and oriented, followed by another loss or altered state of consciousness. Common symptoms include confusion, dizziness, drowsiness, enlarged pupil in one eye, headache (severe) and nausea or vomiting.

Subdural hematomas occur where there is a tearing of the bridging veins between the cerebral cortex and the draining venous sinus, though sometimes caused by artery lacerations on the brain’s surface. Patient prognosis is not as good for this hematoma location. There may be a loss or altered state of consciousness, but if so, the patient will most often regain consciousness and generally not relapse. Symptoms identical to epidural hematoma are likely present, but in some cases, oddly enough, there may be no symptoms at all.

Subarachnoid hematomas occur in the area between the arachnoid membrane and just above the surface of the brain atop the pia mater. Symptoms include a severe headache with rapid onset, vomiting, confusion or a lowered level of consciousness, and sometimes seizures. Treatment for this type and location of hematoma is usually prompt neurosurgery.

Intracerebral hematomas occur within the brain itself or within the brain ventricles (where cerebral spinal fluid is produced), sometimes both simultaneously. Symptoms can include headache, one-sided weakness, vomiting, seizures, decreased level of consciousness and neck stiffness. Fever is also common. This hematoma location is extremely serious. Traumatic intracranial hematomas are divided into acute and delayed. Acute intracerebral hematomas occur at the time of trauma while delayed intracerebral hematomas have been reported from as early as 6 hours post trauma to as long as several weeks. Intracerebral bleeds and related hematomas are associated with more severe head-trauma events such as a penetrating projectile (bullet, shrapnel, metal object) or a depressed skull fracture.

Surgical repair of a ruptured vessel is generally not needed and often not possible given the bleed location, the minute size of the vessel and the overall health of the patient. The hope is the bleed will stop on its own and many do. This can be complicated by a number of factors including high blood pressure (hypertension), a low red blood cell count (anemia) or medications the patient may be taking that thin the blood. To be certain, a rupture that continues to bleed and a hematoma that continues to grow in size is an emergency situation and must be addressed. There are surgical options that involve evacuation and decompression. 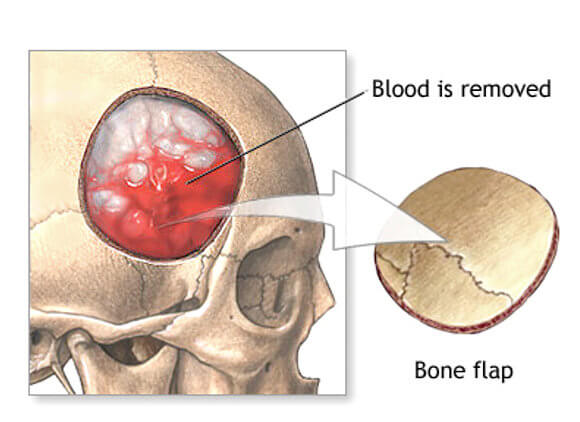 The least invasive surgical option is aspiration. Aspiration involves draining the hematoma by drilling a small hole in the skull and using a needle to evacuate the blood. Repairing the bleed is also a goal. With this procedure it’s sometimes difficult to find the exact location of the bleed and often the hematoma cannot be completely removed. A more invasive procedure is a craniotomy (partial removal of a portion of the skull). In this procedure blood evacuation is made easier. This obviously is a major surgical procedure and is typically used only when the hematoma is large or when it’s compressing the brain stem where critical functions are controlled.

Swelling (edema) is the body’s response to all types of injuries. Physiologically, it’s a condition of abnormally large amounts of fluid in the circulatory system or in tissue between the body’s cells.

Edema is the sign of an underlying problem, rather than a disease itself. Generally, swelling within the body happens quickly and is simple to treat with a combination of ice, elevation, medicine or removal of excess fluid.

Brain tissue, like all tissue in the body, can swell. Brain swelling can be in specific locations or throughout the brain and can be a direct or indirect response to trauma. Unlike swelling in most other parts of the body, brain swelling can quickly cause serious problems, including death. This is because the thick, bony skull that snugly protects the brain provides little room for the swelling brain to expand. With no place to expand to, a swelling brain creates highly dangerous “intracranial pressure.” 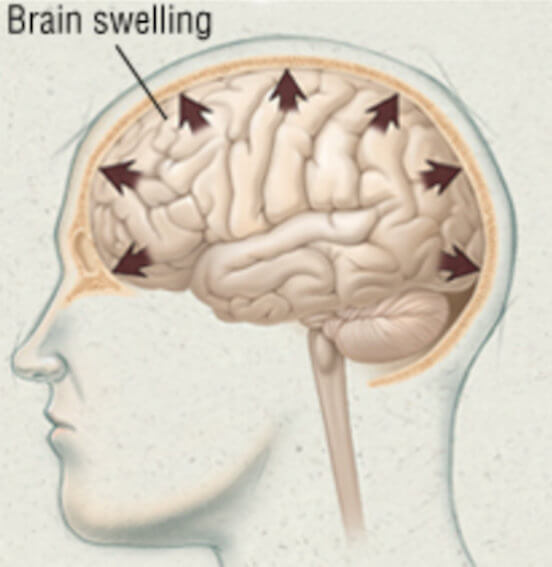 Intracranial pressure (ICP) puts pressure on, and directly compresses, brain structures. If not alleviated, mounting intracranial pressure can prevent blood from flowing to and through the brain by compressing the blood vessels themselves. This occurs because the brain is soft, has the consistency of gelatin and compresses easily. Blood vessel compression deprives the brain of the oxygen it needs to function and survive. Swelling can also block other fluids, namely cerebral spinal fluid, from leaving the brain which can make the swelling and ICP even worse. If unrelieved, brain tissue destruction on a tremendous scale can occur through widespread blood flow compromise, through brain structure displacement and even brain herniation. Brain herniation is almost always fatal.

Brain swell can come from numerous dynamic injury-related processes, including expanding hematomas, toxins created by a breakdown of the blood-brain barrier (vasogenic edema) and hydrocephalus.

The brain and spinal cord are encased in cerebral spinal fluid (CSF) which acts to cushion the brain inside the skull, as a delivery system for nutrients the brain needs and as a disposal system for brain waste products.

Normally, CSF flows through ventricles in the brain to its base where the fluid then bathes the brain and spinal cord before it’s re-absorbed into the blood.

When the brain suffers a trauma and tissue surrounding the ventricles swell, this can cause ventricles to narrow disrupting CSF flow. When normal CSF flow is disrupted, a buildup of the fluid can occur and create additional brain swelling and increased brain pressure (ICP). This condition is called hydrocephalus. The name literally means “water on the brain.” 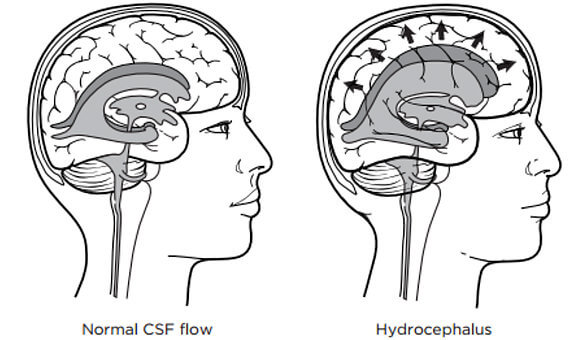 Hydrocephalus poses a serious threat to brain tissue. Addressing this threat requires the surgical insertion of a drainage device called a shunt to reduce the swelling and ease the pressure. A brain shunt is a narrow piece of tubing that’s inserted into the fluid-filled ventricle. The tubing is then passed under the skin into another area of the body, most often the abdomen, where the drained fluid can be safely absorbed.

Excitotoxity is a metabolic process that occurs within the traumatized brain involving a complex series of chemical and nerve membrane reactions. These reactions occur when brain axons and dendrites, through which all brain communication occurs, become stretched, twisted and torn during a traumatic event. This damage is called “diffuse axonal injury” which happens at the moment of trauma making it a primary injury.

When diffuse axonal injury occurs, brain axons and dendrites dump massive amounts of stored glutamate (an essential neurotransmitter) into the brain which creates a toxic environment that causes slow deterioration and ultimate death of surrounding and otherwise healthy brain tissue. This destruction can start within hours of the initial head trauma and last for days thereafter, with full symptom manifestation not present for weeks. Neuroscientists have yet to understand why this happens nor have they discovered how to stop it once it starts. Of the numerous secondary injury processes, it is widely thought that excitotoxicity is the most destructive.

Secondary injuries are the result of bodily responses to initial brain trauma (primary injuries). They are injury processes that can create emergency situations requiring emergent care to minimize or prevent further damage. All are the subject of intense medical research aimed at slowing or stopping the processes altogether.