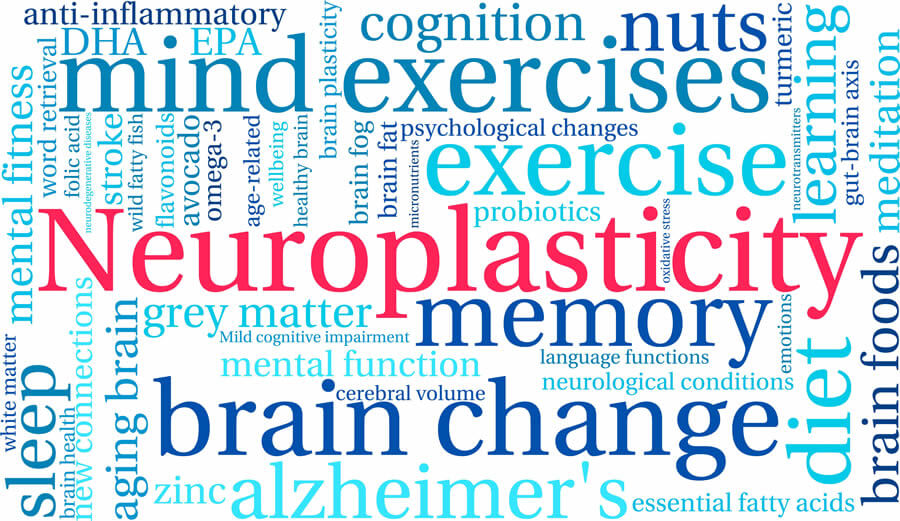 Neuroplasticity is an umbrella term that refers to changes in neural pathways and synapses in the brain due to changes in behavior, environment, neural processes, thinking, and emotions, as well as changes resulting from bodily injury.  This occurs on a variety of levels, ranging from cellular changes due to learning, to large-scale changes involved in cortical remapping in response to traumatic brain injury.  Think of it this way.

Your brain is not a “static” structure.  It’s a dynamic and ever-changing organ with seemingly a life of its own, not unlike a standalone organism.  Initially, the brain goes through massive developmental changes from birth, and through and beyond adolescence, as billions of neural connections are being made.  These changes, however, don’t stop when the brain is fully mature (around age 25).  Amazingly, neuroscience has discovered our brains are changing every day, even, for example, with the mere reading of a sentence like this one.  As you speak, read, think, and perceive the world around you, new neural connections are being formed in response to that stimuli, and conversely, existing connections, in the absence of brain stimulation, are being lost.  In other words, every 24 hours, for better or worse, you wake up with a different brain. Let that sink in!

Positive Neuroplasticity…How the Brain Can Heal Itself

In the context of brain injury, neuroplasticity plays a significant role in the recovery process.  The brain has a wondrous capacity for self-healing, but with definite limits to that capacity.  It heals by changing itself.  This is known as “positive neuroplasticity.”

When neurons die from a traumatic event (primary injuries and secondary injury processes) they are lost forever.  New ones cannot be created.  However, remaining neurons can extend out (grow) to create new connections with each other, essentially reorganizing the synaptic network.  Otherwise stated, following injury the brain tries to “wire around” the damaged parts to keep the network communication going.  This occurs automatically, but we need to get out of the brain’s way for this to happen as it should.

How to Help Your Brain Heal

There are numerous things a person can do early on to promote positive neuroplasticity and help their brain heal, particularly when a mild traumatic brain injury or concussion is involved.

The specific details of how the brain’s self-healing properties work at the molecular and structural levels is the subject of intense neuroscience research. It is hoped that someday we can find ways to either directly intervene to help the healing process or indirectly to assist the brain in healing itself.

Passive cognitive reserve simply represents an assessment of the amount of neuronal and other brain tissue a person has.  It is a reference to existing volume and density.  In other words, how big is the brain and how extensively is it wired.  That obviously varies from person  to person and sometimes significantly.  Large head circumference and large brains, by the way, are associated with greater resilience against cognitive impairment.

A traumatic brain injury can take away a person’s cognitive reserve (both passive and active) through tissue destruction/compromise directly effecting passive cognitive reserve, and by traumatically altering protective brain systems and structures that help guard against the development of brain toxicity, known to cause numerous brain diseases.  This affects active cognitive reserve.  These losses and/or changes can dramatically alter future brain health and are the essence of negative neuroplasticity.

Negative neuroplasticity simply means that something in the brain environment of an individual is creating a negative effect on the physical structure of the brain and/or the ongoing functionality of the brain, which then, overtime, actually causes brain atrophy (shrinkage), reduced connections between brain neurons, unfavorable and destructive levels of certain neurotransmitters, and other damaging factors and conditions.  With negative neuroplasticity the brain gets smaller, becomes less efficient, and is less protected.  Essentially, it causes the brain to “prematurely age.”  This accelerated aging is demonstrated across the board through a wide array of diminished neurological functions including basic and executive cognitive processing (thinking), sensory perception, memory encoding and retrieval, emotional control, and others.

Negative neuroplasticity has become synonymous with neurodegenerative diseases which have been collectively described and labeled as “advanced aging,” though tragically affecting those not advanced in age.  The public is aware, for example, of NFL players who have suffered advanced aging brains (and the maladies that go with it) because of trauma.  Studies are now showing that reduction of cognitive reserve leading to negative neuroplasticity is at the root of these findings and supports the growing consensus that traumatic brain injury can often be a lifelong chronic disease itself.