Neurons are the “working” cells within the brain and central nervous system and are responsible for all brain communication within and throughout the body. Neurons have a specialized structure which allows them to transmit signals in the form of electrical impulses from the brain to the body and back. Transmission is continuous, occurs at amazing speeds, and involves chemical components known as “neurotransmitters” that help make the signally possible. There are 3 types of neurons: sensory neurons, motor neurons, and interneurons. Each have different functions and the brain needs all of them to communicate effectively with the rest of the body (and vice versa).

Sensory neurons are activated by sensory input (such as sights, sounds, smells, physical contact, heat, cold) ultimately conveying sensory information to the brain and spinal cord. Sensory neurons can extend great lengths within the body, as much as 3 feet or more.  The brain and spinal cord make up the entirety of the central nervous system (CNS).

Motor neurons are in the central nervous system and project/extend outside the CNS to control muscles directly and indirectly.  It is through these neurons that the brain controls body movement and organ function.  These neurons can also exceed 3 feet in length.  Once motor neurons exit the spinal cord, they are considered part of the peripheral nervous system.

Interneurons are neither sensory nor motor, but rather act as the “middlemen” that form the connections between the two.  Located in the CNS, they operate locally, meaning they connect only to nearby sensory or motor neurons.  They can be short in length forming “circuits” with nearby neurons, or longer when acting as “relay” interneurons connecting one portion of a region of the brain to other regions.

The Structure of a Neuron

All three types of neurons have structural similarities.  Common to each is an axon, which is a delicate tube-like structure that extends from the neuron head (cell body or soma) down to where it ends at the branch-like axon terminal.  Think of an axon as a wire providing electrical current to make the brain engine run. Axons can be very short, less than a millimeter, or like extension cords when say a sensory or motor neuron must extend 3 feet or more to reach outer locations within the body. 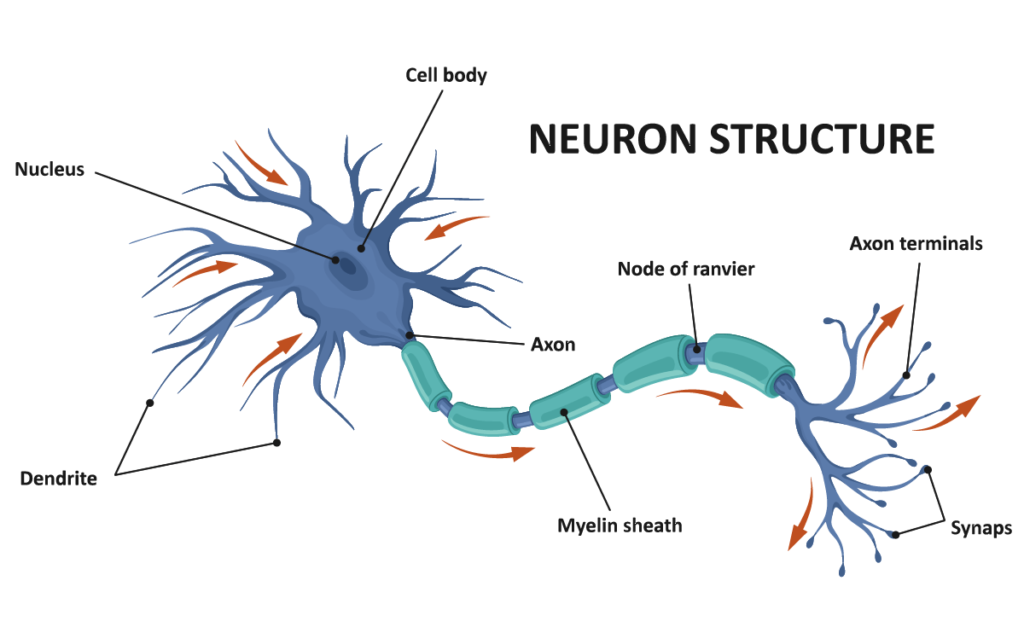 Through neurons and their axons, the brain communicates via electrical impulses passing from one connected neuron to another, and another, and so on. Each neuron is connected to thousands and thousands of other neurons to form a vast, vital, and super dense communication network. Without solid, intact, and functioning neuron axons, messages cannot be received by the brain and brain impulses/commands cannot be sent. In other words, the brain ceases to function without the ability to communicate through the axons of neurons.

Neuron Axons are Vulnerable to Injury 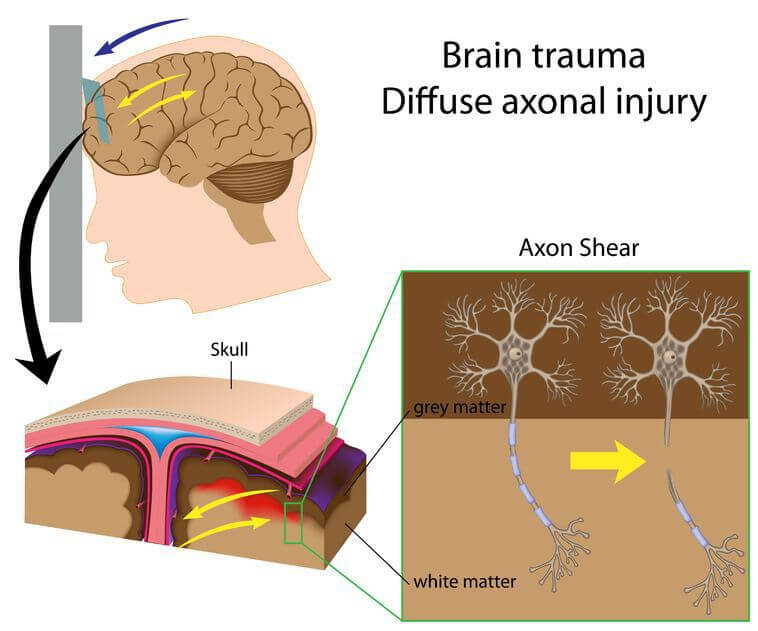 In addition to extending to outer body regions, our fragile axons extend to and run through the various structures within the brain. Our brain structures have different densities, meaning different weights. A good example of density difference can be found in the gray matter compared to the white matter in the brain. The gray matter is denser and weighs more than white matter. Billions and billions of neurons in the gray matter of the brain have axons extending into and through the white matter of the brain. This configuration makes these axons particularly vulnerable to shearing associated with rapid acceleration/deceleration forces applied to the brain during traumatic events. 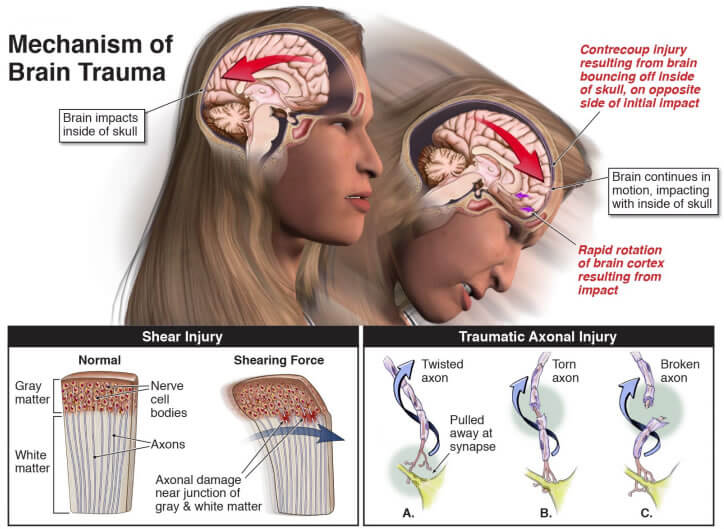 When a traumatic event happens and brain structures (like gray matter and white matter) move, shift, and rapidly rotate at different speeds (because of their varying densities), the axons extending between the structures can stretch, twist, tear, and break. This can damage the axon resulting in a breakdown of the neuron’s ability to receive and pass along brain signals. Most axons damaged in this way heal on their own over time following a traumatic event, but some do not and are lost forever.

Depending on the extent of the trauma, this type of axon damage can occur on a wide scale (diffuse) throughout the brain and cause extensive damage resulting in the death of billions of neurons. This damage and destruction are referred to as “diffuse axonal injury” (DAI) and can be very serious with permanent consequences.

It is important to note it’s the application of forces to the brain, rather than the head per se, that produces DAI.  In other words, not all head injuries produce brain injuries and some brain injuries (particularly those resulting from acceleration/deceleration forces not caused by an external impact) may occur without apparent head injury.