What is a concussion?

Don’t be confused. A concussion is a mild traumatic brain injury (MTBI) and should be taken seriously. Just ask the NFL. Physicians often use the terms concussion and MTBI interchangeably, which can lead to confusion and a tendency to understate and under appreciate the significance of a concussion.

The Centers for Disease Control defines a concussion as follows:

“The term mild traumatic brain injury (MTBI) is used interchangeably with the term concussion. An MTBI or Concussion is defined as a complex patho-physiologic process affecting the brain, induced by traumatic biomechanical forces secondary to direct or indirect forces to the head. MTBI is caused by a blow or jolt to the head that disrupts the function of the brain. This disturbance of brain function is typically associated with normal structural neuroimaging findings (i.e., CT scan, MRI). MTBI results in a constellation of physical, emotional and/or sleep-related symptoms and may or may not involve loss of consciousness. Duration of symptoms is highly variable and last from several minutes to days, weeks, months or even longer in some cases.” (taken from CDC Physicians Toolkit: Facts for Physicians About Mild Traumatic Brain Injury: 2007)

Concussions can be tricky to diagnose. Signs of a concussion may not appear for days or weeks after injury, and some signs last for just seconds while others may linger.

Concussions can cause a wide variety of physical, emotional, cognitive, and behavioral symptoms. You don’t need to experience all the following symptoms to have a concussion. Some symptoms happen immediately, and some appear and may disappear over time.

Recovery times are different for each person and injury severity and past concussion history play a role.  A good number of people experience only short-term effects while others are not as fortunate.

If you suspect your child may have suffered a concussion there are some basic tests to consider.  Basic concussion testing includes questions and a physical exam which can include vision, hearing, balance, and coordination tests, and questions designed to test memory and concentration.

Soon a blood test may also be used to help diagnose a concussion.  The FDA recently approved a test, called the “Brain Trauma Indicator” for adults with suspected concussions.  The test measures certain proteins that are released into the bloodstream within 24 hours of a head injury.  The test may be able to show how serious the injury is and may be used to determine whether a CT scan or other testing is needed.

A healthcare professional can decide how serious the concussion is and whether you require treatment. If you have suffered a grade 1 or grade 2 concussion, wait until symptoms are gone before returning to normal activities. That could take several minutes, hours, days, or weeks. If you have sustained a grade 3 concussion, see a doctor immediately for observation and treatment. A doctor will ask how the head injury happened and discuss the symptoms. 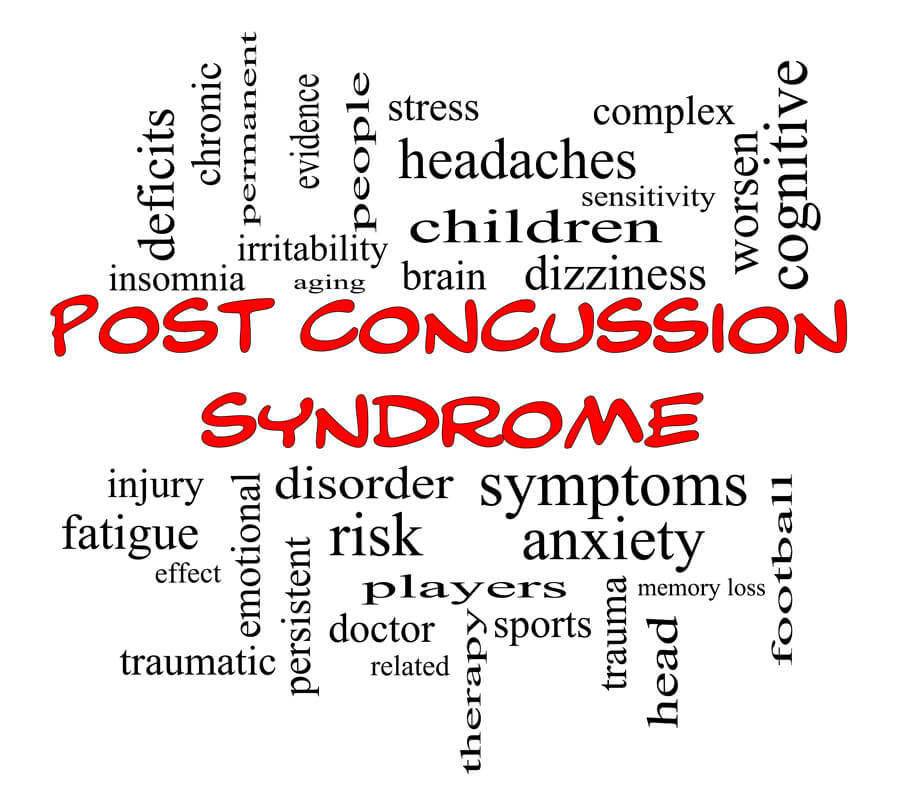 Post-Concussion Syndrome (PCS) is a “catch-all” diagnostic phrase used to collectively describe concussion symptoms, which are identical to those of MTBI, and do not resolve in days or weeks but instead persist. Medical science does not yet have an answer as to why some individuals have a relatively quick and complete recovery from a concussion and why some individuals go on to experience PCS. Concussion symptoms generally appear within the first 7 to 10 days and go away for most people within 3 months. When they persist, a post-concussion syndrome diagnosis is sometimes used to describe this traumatic brain injury.